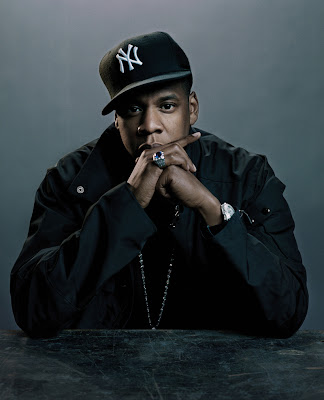 Born in the Marcy Streets Projects in Brooklyn, the young Sean Carter grew up with his mother and younger brother in the notorious Marcy Street Projects in Brooklyn. His mother talks about listening to Sean banging out beats on the kitchen table which caused her to buy him a drum machine. Sean had an unremarkable childhood, a typical one for an inner city child, although at the age of 12 he shot his brother in the arm for stealing his jewelry. As Sean grew older, he became involved with drug dealing but music was his first love.

He went to school with fellow Brooklyn rappers, Busta Rhymes and Biggie Smalls and used to battle in the area. This was the time when Jay Z was born. A homage to one of his mentors Jay O, but also to the train line whose stop runs to his home. The J/Z line With his first album.No reasonable Doubt, Jay Z was propelled to Hip Hop Royalty. His subsequent Albums have sold over 50 million units crowning Jay Z as the king of hip-hop.

Not only is Jay-Z a prolific recording artist but he has his hands in other pots. He is the head of the Roca Fella label and has been instrumental in the success of artists such as Tierra Marie and Rihanna. He created a fashion label called Roca Wear which he sold last year for 200 million dollars. He was the first rap act to headline the English rock festival at Glastonbury. He has opened the 40/40 club in NYC with several others scheduled to open all over the US. Not only has Jay show that he has the lyrical skills to make it out of the projects, but he has the business acumen to make it last as well.

On April 4th 2008, Jay married his long time girlfriend Beyonce Knowles. Neither has formally acknowledged their relationship, but it is a testimony to the foresight of both that their personal lives has remained just that. Personal.

starpulse
Posted by theceelist at 7:05 AM