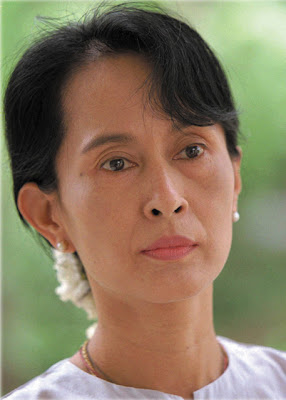 Aung was born the daughter of a general. Her father had aided in Burma's independence from the British.He was assassinated by his rivals a year later and she was raised by her mother. She had two brothers, one of whom drowned and one who immigrated to the United States. Her mother soon became involved in Politics and was appointed the Ambassador to India. Aung was educated in India before going on to attain her first degree in Oxford in 1969.She met and married her husband, a professor of Tibetan Culture, Michael Aris in 1972. She had two sons, Alexander born in 1973 and Kim born in 1977.

In 1983, she returned to Burma (now known as Myanmar) in order to take care of her now ailing mother. It was there that she saw firsthand the effects of military rule and decided to become involved. She helped form the National League for Democracy partly because of her desire to see all citizens of Myanmar living in a democratic country and partly as a result of her Buddhist belief of non violence. This was in 1988. In July 1989 she was placed under house arrest for the first time. She was offered freedom if she left the country but she refused.

In 1999 the Junta called for a general election. The National League won and naturally Aung being the leader. She would have been Prime Minister elect, but the junta nullified the election and refused to allow the country to walk down the same road of democracy (which other nations have walked.) In 1991 she was awarded the Nobel Peace Prize for her non violent struggle and human rights. To this day, she is the only recipient to be imprisoned for her beliefs.

The Junta has offered to allow her to leave with the condition that she never returns. She refuses this often as she should. She has suffered great losses because of her convictions.Her husband died of prostate cancer in 1997. She has not seen her sons for years and the toil on her health has been terrible. Yet the Junta refuses to free her. She has had the major world’s leaders campaign for her release but the military refuse to concede. Perhaps they realize, that she is a symbol for freedom, and would rather imprison her like a caged bird than to allow her to roam free.

For 12 years out of the past 18 years, Aung San Su Kyi has been held under house arrest by the military junta of Burma. She has been held captive because she stands for something that the Junta cannot stand for.She stands for freedom!

freedom
nobelprize
Posted by theceelist at 7:00 AM