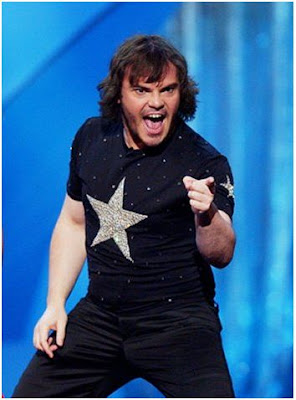 Whether entertaining us as one half of the comedy/music act Tenacious D or acting as a self obsessed actor in Tropic Thunder, Jack Black steals the laughs from within your chest. It must have been the last thing that his parents thought that he would be doing in his grown up life, but humor was actually as equal a part of Jacks childhood as was academia.. Both of them being Scientists, his mother even worked on the Space Hubble telescope. Jack was raised in California and by the third grade. His natural talent for making people laugh was evident.

One of his English teachers became so exasperated at the thought of failing one who was bright yet wasn’t committed to doing the work that he made a deal with him. If Jack could act one scene from Sam Sheppard’s, Fool for Love, then he would pass him. Jack succeeded.partly he says in order to be able to impress the girl that he was acting with!

He went on to join the Tim Robbins co founded acting group where he met his future comedic partner…Kyle Gass. It was there that his group" Tenacious D" which was formed, and even though their music isn’t exactly considered high brow..It allows Jack to release the latent rock star within. There was even a fictitious film in 2006 which tanked but still the fact that he was able to get someone to make a movie based on a comedy duo is outstanding.

Not only a musician,Jack has starred on TV and Movies in many break out hits. His most notable being High Fidelity. What makes Jack different from other funny men is that he started out as an actor. Other similar “funny men’ such as Jim Carrey and Rob Williams, have had a harder time, trying to divert their movie careers onto vehicles,that call for more serious actors.

With the birth of his first son in 2006 followed by his second son in May 2008,Jack has calmed down a bit. He is taking on more meaningful, family friendly roles.

I mean how cool is it to be able to show your child a movie where your character is a Kung Fu Loving panda!

tiscali
imdb
Posted by theceelist at 8:00 AM