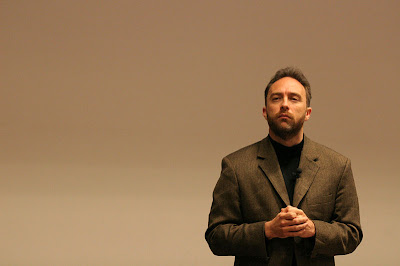 "Edit this page." Just three little words, but what a miracle they have wrought. Just about every entry on Wikipedia.org, the online encyclopedia, invites visitors to fiddle. Is the entry incomplete? Add something. Is it wrong? Correct it. Is it biased? Edit away. That such a remarkably open-door policy has resulted in the biggest (and perhaps best) encyclopedia in the world is a testament to the vision of one man, Jimmy Wales.

Wales, 39, is a former options trader who in 1999, set out to reinvent the encyclopedia for the Internet age—free, up-to-date and available to all. He started the way most encyclopedists start, by commissioning articles from experts and subjecting them to peer review. After 18 months, he had a pitiful 12 entries; at that rate, it would take a few millenniums to equal Encyclopaedia Britannica. So Wales created a free-form companion site based on a little-known software program called a wiki (the Hawaiian term means quick) that makes it easy—with the "edit this page" button—to enter and track changes to Web pages. The effect was explosive. That simple button turned readers into contributors and contributors into evangelists. Wikipedia now has more than a million articles in English, nearly 10 times as many as in Britannica. That number nearly doubles each year. And most extraordinarily, the site has not been defaced by vandals or hijacked by zealots. Or more precisely, it is vandalized every day, but is usually repaired within minutes by any one of the millions of users who are motivated to protect and nurture the site.

Today Wales is celebrated as a champion of Internet-enabled egalitarianism. He describes himself not as anti-elitist but as "anti-credentialist." That's a key distinction. It means that amateurs can have as much to contribute as professionals and that talent can be found anywhere. Everyone predicted that mob rule would lead to chaos.

Instead it has led to what may prove to be the most powerful industrial model of the 21st century: peer production. Wikipedia is proof that it works, and Jimmy Wales is its prophet.