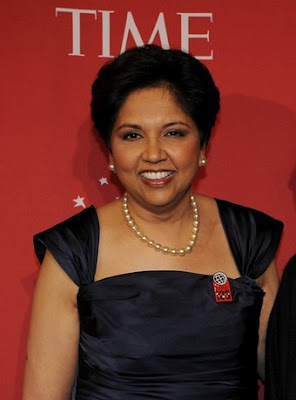 Forbes considers Indra K Nooyi as one of the most influential woman in business within the US. She has headed PepsiCo as President, Chair and CEO after being elected as such in 2006/7.

Raised in a middle class family in India. Indra was hardly the traditional Hindu girl. She played in an all girls cricket team and formed an all girl rock band as a teen. Indra received her Bachelor of Science degree from one of only 2 business schools in India. She received her Master’s there and it was a spontaneous thought that lead her to apply to study at Yale.

She was accepted and received her Master’s degree in public and private management. She began her business career working for Johnson and Johnson in India. After working in planning strategy for Motorola, Boston Consulting Company and Asea Brown Boveri, Indra began working for PepsiCo in 1994. Indra was one of the key executives in the change of direction of PepsiCo, from what it was to being one of the foremost, food and beverage companies in the world. Known for her toughness and sometimes abrasive manner. It is clear that in a world that is filled with privileged men, Indra has managed to break the glass ceiling with her accomplishments.

As a wife and mother Indra shows that it is possible for women to hold a high powered position and be a mother too. Surely a woman that young girls should aspire to be like.

ft
enotes
nytimes
pepsico
Posted by theceelist at 7:00 AM