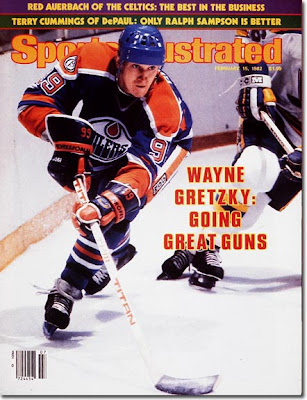 Wayne Gretzky was named the greatest player in National Hockey League history by The Hockey News in 1998. Among his accomplishments: he was the NHL's all-time leading scorer, he was named league MVP nine times and he led the Edmonton Oilers to four Stanley Cups in five years from 1984-88. Gretzky made hockey somewhat of a Hollywood fad when he was traded to Los Angeles in 1988, and he finished his career with the New York Rangers, playing his last NHL game on 18 April 1999. Later that year he was inducted into the Hockey Hall of Fame (the usual three-year waiting period was waived in his case), and the NHL retired his jersey number, 99, permanently throughout the league. In 2000 Gretzky joined the NHL's Phoenix Coyotes as a managing partner. Five years later, in 2005, he moved behind the bench as the team's head coach. His first year as coach was a rough one: A losing season on the ice; the deaths of his mother and grandmother; and a gambling scandal involving his assistant coach and implicating his wife.