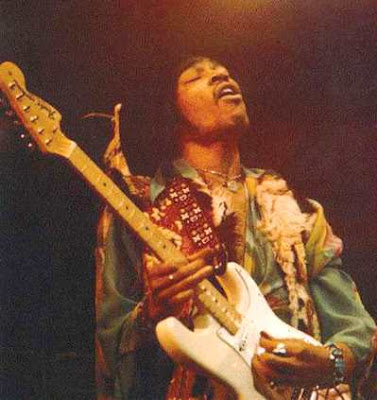 Jimi Hendrix was one of rock's few true originals. He was one of the most innovative and influential rock guitarists of the late '60s and perhaps the most important electric guitarist after Charlie Christian. His influence figures prominently in the playing styles of rockers ranging from Robin Trower to Vernon Reid to Stevie Ray Vaughan. A left-hander who took a right-handed Fender Stratocaster and played it upside down, Hendrix pioneered the use of the instrument as an electronic sound source. Players before Hendrix had experimented with feedback and distortion, but he turned those effects and others into a controlled, fluid vocabulary every bit as personal as the blues with which he began. His expressively unconventional, six-string vocabulary has lived on in the work of such guitarists as Adrian Belew, Eddie Van Halen, and Prince. But while he unleashed noise--and such classic hard-rock riffs as "Purple Haze," "Foxy Lady," and "Crosstown Traffic"--with uncanny mastery, Hendrix also created such tender ballads as "The Wind Cries Mary," the oft-covered "Little Wing," and "Angel," and haunting blues recordings such as "Red House" and "Voodoo Chile." Although Hendrix did not consider himself a good singer, his vocals were nearly as wide-ranging, intimate, and evocative as his guitar playing.

Hendrix's studio craft and his virtuosity with both conventional and unconventional guitar sounds have been widely imitated, and his image as the psychedelic voodoo child conjuring uncontrollable forces is a rock archetype. His songs have inspired several tribute albums, and have been recorded by a jazz group (1989's Hendrix Project), the Kronos String Quartet, and avant-garde flutist Robert Dick. Hendrix's musical vision had a profound effect on everybody from Sly Stone to George Clinton to Miles Davis to Prince to OutKast. Hendrix's theatrical performing style--full of unmistakably sexual undulations, and such tricks as playing the guitar behind his back (a tradition that went back at least to bluesman T-Bone Walker) and picking it with his teeth--has never quite been equaled. In the decades since Hendrix's death, pop stars from Rick James and Prince to Lenny Kravitz and Erykah Badu have evoked his look and style.

As a teenager growing up in Seattle, Hendrix taught himself to play guitar by listening to records by blues guitarists Muddy Waters and B.B. King and rockers such as Chuck Berry and Eddie Cochran. He played in high school bands before enlisting in the U.S. Army in 1959. Discharged in 1961, Hendrix began working under the pseudonym Jimmy James as a pickup guitarist. By 1964, when he moved to New York, he had played behind Sam Cooke, B.B. King, Little Richard, Jackie Wilson, Ike and Tina Turner, and Wilson Pickett. In New York he played the club circuit with King Curtis, the Isley Brothers, John Paul Hammond, and Curtis Knight.

In 1965 Hendrix formed his own band, Jimmy James and the Blue Flames, to play Greenwich Village coffeehouses. Chas Chandler of the Animals took him to London in the autumn of 1966 and arranged for the creation of the Jimi Hendrix Experience, with Englishmen Noel Redding on bass and Mitch Mitchell on drums.

The Experience's first single, "Hey Joe," reached Number Six on the U.K. chart in early 1967, followed shortly by "Purple Haze" and its double-platinum debut album, Are You Experienced? (Number Five, 1967). Hendrix fast became the rage of London's pop society. Though word of the Hendrix phenomenon spread through the U.S., he was not seen in America (and no records were released) until June 1967, when, at Paul McCartney's insistence, the Experience appeared at the Monterey Pop Festival. The performance, which Hendrix climaxed by burning his guitar, was filmed by D.A. Pennebaker for the documentary Monterey Pop.

In August 1969, Hendrix appeared at the Woodstock Festival with a large, informal ensemble called the Electric Sky Church, and later that year he put together the all-black Band of Gypsys--with Cox and drummer Buddy Miles (Electric Flag), with whom he had played behind Wilson Pickett. The Band of Gypsys' debut concert at New York's Fillmore East on New Year's Eve 1969 provided the recordings for the group's only album during its existence, Band of Gypsys (Number Five, 1970). (A second album of vintage tracks was released in 1986.) Hendrix walked offstage in the middle of their Madison Square Garden gig; when he performed again some months later it was with Mitchell and Cox, the group that recorded The Cry of Love (Number Three, 1971), Hendrix's last self-authorized album. With them he played at the Isle of Wight Festival, his last concert, in August 1970, a recording of which would see release in 2002. A month later he was dead. The cause of death was given in a coroner's report as inhalation of vomit following barbiturate intoxication. Suicide was not ruled out, but evidence pointed to an accident.

In the years since his death, the Hendrix legend has lived on through various media. Randi Hansen (who appeared in the video for Devo's 1984 cover of "Are You Experienced?") became the best known of a bunch of full-time Hendrix impersonators, even re-forming the Band of Gypsys with bassist Tony Saunders and Buddy Miles--who, briefly in the late '80s, was replaced by Mitch Mitchell.

rollingstone
Posted by theceelist at 10:09 AM

CeeCee... it was like he was vibrating on different waves than we are... lovewaves... what is ur fav song of Jimi's?

Hi Cate! I think he did a awesome job with wild thing & The Star Spangled Banner...