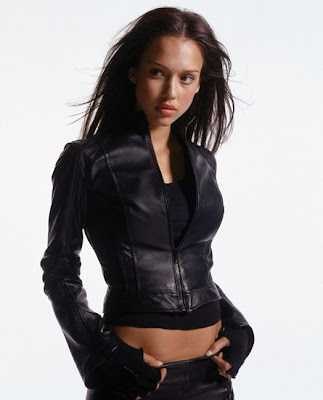 Born in Pomona, California, on April 28, 1981, Jessica Alba and her family moved to Biloxi, Mississippi, when she was an infant

. Three years later her Air Force father brought the family back to California, then to Del Rio, Texas, before finally settling in Southern California when Jessica was nine. In love with the idea of becoming an actress from the age of five, she was 12 before she took her first acting class. Nine months later she was signed by an agent. A gifted young actress, Jessica has already played a variety of roles ranging from light comedy to gritty drama since beginning her career.

She made her feature film debut in 1993 in Hollywood Pictures' comedy Camp Nowhere (1994). Originally hired for two weeks, she got her break when an actress in a principal role suddenly dropped out. Jessica cheerfully admits it wasn't her prodigious talent or charm that inspired the director to tap her to take over the part -- it was her hair, which matched the original performer's. The two-week job stretched to two months, and Jessica ended the film with an impressive first credit. Two national TV commercials for Nintendo and J.C. Penney quickly followed before Jessica was featured in several independent films.

She branched out into tv in 1994 with a recurring role in Nickelodeon's popular comedy series "The Secret World of Alex Mack" (1994). She played an insufferable young snob, devoted to making life miserable for the the title character, played by Larisa Oleynik. That same year she won the role of Maya in "Flipper" (1995) and filmed the pilot for the series. She spent 1995 shooting the first season's episodes in Australia. An avid swimmer and PADI-certified scuba diver, Jessica was delighted to be doing a show that allowed her to play with dolphins. The show's success guaranteed it a second season, which she also starred in.

Her involvement in the show lasted from 1995 to 1997. Since the show ended she has appeared in a number of TV shows and films. In 1996 she appeared in Venus Rising (1995) as Young Eve. The next year she appeared on the "The Dini Petty Show" (1989), a Canadian talk show, and spoke about her role in "Flipper" and her general acting career.

Jessica is a cutie Cee...

Never seen her in a film...