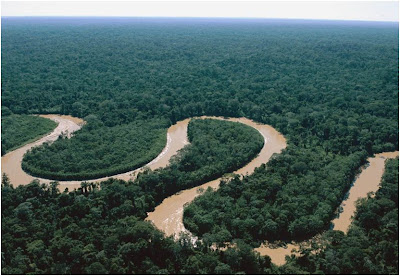 The Amazon rainforest, also known as Amazonia, is one of the world's greatest natural resources. Because its vegetation continuously recycles carbon dioxide into oxygen, it has been described as the "Lungs of our Planet". About 20% of earth's oxygen is produced by the Amazon rainforest.

The Amazon rainforest gets its name from the Amazon River, the life force of the rainforest. The Amazon River begins in the Peruvian Andes, and winds its way east over the northern half of South America. It meets the Atlantic Ocean at Belem, Brazil. The main river is about 4,080 miles long. Its drainage basin covers 2,722,000 million square miles, and lies in the countries of Brazil, Columbia, Peru, Venezuela, Ecuador, Bolivia, and the three Guyanas. Sixteen percent of all the world's river water flows through the Amazon delta. Twenty eight billion gallons of water flow into the Atlantic every minute, diluting the salinity of the ocean for more than 100 miles offshore. The Amazon rainforest watershed is home to the world's highest level of biodiversity.

Posted by theceelist at 7:50 AM