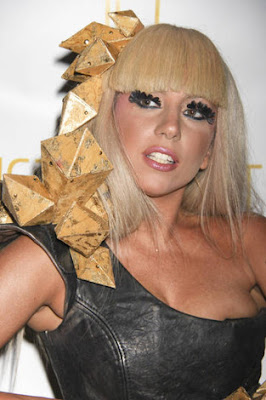 It’s no wonder that little girl from a good Italian New York family, turned into the exhibitionist, multi-talented singer-songwriter with a flair for theatrics that she is today: Lady GaGa.
“I was always an entertainer. I was a ham as a little girl and I’m a ham today,” says Lady GaGa, 22, who made a name for herself on the Lower East Side club scene with the infectious dance-pop party song “Beautiful Dirty Rich,” and wild, theatrical, and often tongue-in-cheek “shock art” performances where GaGa – who designs and makes many of her stage outfits -- would strip down to her hand-crafted hot pants and bikini top, light cans of hairspray on fire, and strike a pose as a disco ball lowered from the ceiling to the orchestral sounds of A Clockwork Orange.
“I always loved rock and pop and theater. When I discovered Queen and David Bowie is when it really came together for me and I realized I could do all three,” says GaGa, who nicked her name from Queen’s song “Radio Gaga” and who cites rock star girlfriends, Peggy Bundy, and Donatella Versace as her fashion icons. “I look at those artists as icons in art. It’s not just about the music. It’s about the performance, the attitude, the look; it’s everything. And, that is where I live as an artist and that is what I want to accomplish.”

That goal might seem lofty, but consider the artist: GaGa is the girl who at age 4 learned piano by ear. By age 13, she had written her first piano ballad. At 14, she played open mike nights at clubs such as New York’s the Bitter End by night and was teased for her quirky, eccentric style by her Convent of the Sacred Heart School (the Manhattan private school Nicky and Paris Hilton attended) classmates by day. At age 17, she became was one of 20 kids in the world to get early admission to Tisch School of the Arts at NYU. Signed by her 20th birthday and writing songs for other artists (such as the Pussycat Dolls, and has been asked to write for a series of Interscope artists) before her debut album was even released, Lady GaGa has earned the right to reach for the sky.
“My goal as an artist is to funnel a pop record to a world in a very interesting way,” says GaGa, who wrote all of her lyrics, all of her melodies, and played most of the synth work on her album, The Fame (Streamline/Interscope/KonLive). “I almost want to trick people into hanging with something that is really cool with a pop song. It’s almost like the spoonful of sugar and I’m the medicine.”
GaGa shows her passion for love songs on such softer tracks as the Queen-influenced “Brown Eyes” and the sweet kiss-off break-up song “Nothing I can Say (eh eh).” “‘Brown Eyes’ is the most vulnerable song on the album,” she explains. “‘Eh Eh’ is my simple pop song about finding someone new and breaking up with the old boyfriend.”
For the new tour for this album, fans will be treated to a more polished version of what they saw (and loved) at her critically acclaimed Lollapalooza show in August 2007 and Winter Music Conference performance in March 2008. “This new show is the couture version of my handmade downtown performance of the past few years. It’s more fine-tuned, but some of my favorite elements to my past shows – the disco balls, hot pants, sequin, and stilettos – will still be there. Just more fierce and more of a conceptual show with a vision for pop performance art.”

It’s been a while since a new pop artist has made her way in the music industry the old-fashioned/grass roots way by paying her dues with seedy club gigs and self-promotion. This is one rising pop star who hasn’t been plucked from a model casting call, born into a famous family, won a reality TV singing contest, or emerged from a teen cable TV sitcom. “I did this the way you are supposed to. I played every club in New York City and I bombed in every club and then killed it in every club and I found myself as an artist. I learned how to survive as an artist, get real, and how to fail and then figure out who I was as singer and performer. And, I worked hard.”
GaGa adds with a wink in her eye, “And, now, I’m just trying to change the world one sequin at a time.”

--ladygaga
Posted by theceelist at 9:52 PM

“And, now, I’m just trying to change the world one sequin at a time.”