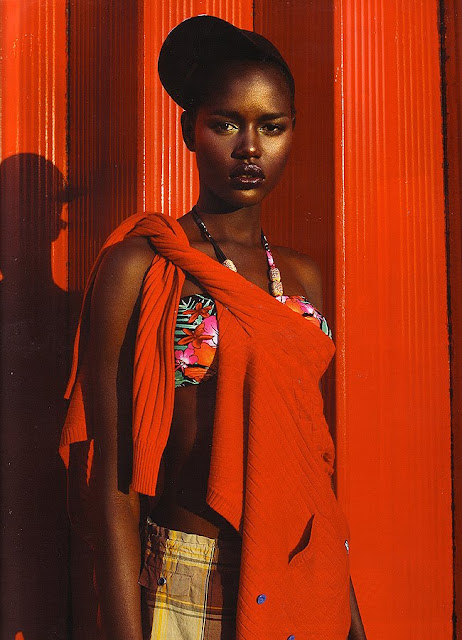 20-year-old Ajak worked the fall 2010 Chloé show in Paris, the Sudanese beauty became the first black model to walk for the label in more than nine seasons. But that level of success didn't just fall in her lap. In spring 2010, she flew under the radar, mostly walking for small New York designers (Brian Reyes, Dennis Basso, Sophie Theallet). Eventually the newcomer snagged a spot in Benetton's spring campaign, lensed by Josh Olins, and that's when casting directors started to view the model in a different light. During her second stab at Fashion Week, she was confirmed at Isaac Mizrahi and Marc by Marc Jacobs, which led to a surprisingly successful run in Paris, walking for Jean Paul Gaultier, Lanvin, Maison Martin Margiela, and Givenchy, among others.
http://nymag.com/daily/fashion/2010/06/meet_the_new_girl_ajak_wants_t.html
Posted by theceelist at 6:48 PM

I..she look edgy in these cloths in a good way..not to hard..shes got a bad girl swagger in these!
LOL.she mks me wish my lips were a bit fuller..she got those Jolie! or vise versa..lol