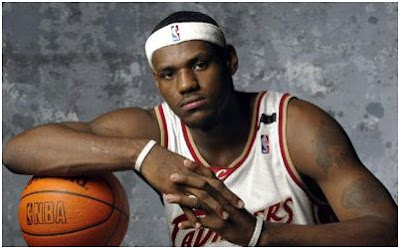 LeBron’s Band of Brothers In an excerpt from his new book, the N.B.A.’s biggest star recalls the team that made him: five kids who challenged themselves, one another, and their community, going all the way to the bittersweet final game that would make them National Champions.

I believe that things happen for a reason. I believe it was Karma that connected me to Coach
Dru.

Dru Joyce graduated from Ohio University in 1978. He got a sales job at Hunt-Wesson Foods, in Pittsburgh, and after a few years was promoted to senior sales rep for Cleveland and the eastern suburbs. By all rights Coach Dru and his family should have settled in the Cleveland area. Had he done so, I never would have met him, and without meeting him, who knows what would have happened to me. A district manager at Hunt-Wesson suggested he settle in Akron, which was a little cheaper than Cleveland, and Coach Dru took his advice. He moved there with his family in March of 1984, thinking it was temporary. But there was something about Akron he liked—the size of it, the feel of it, even the smell of it: although Goodyear and Firestone had closed their tire plants in the late 1970s and early 1980s, a few companies were still making rubber products back then, and every afternoon you could catch the sharp aroma. So he stayed, eventually moving to a house on Greenwood Avenue in West Akron. And because he stayed my life changed.

I had a boyfriend who's Father worked for Firestone...

I messed up a friendship. I'm terrible at friendships Cee... I wish I could go to emotional maturity school... oh Cee Cee...

Kitty..OMG.I had a person who I thought was my friend then they just dropped me cold..I was really sad 4 a long x... I use 2 cr every day:(..lol

I was crying too... but I told my friend how much I loved her... now it's better... but I want to do something special for my girlfriend.

Yeah kitty cry & laugh @ the same x..laugh because we had such a GREAT x.. when I think about it I cry because my heart hurts from the lost of the friendship..lk the good mornings what did u do 2day wht u eat 4 dinner all the jokes..the regular stuff..
I actually still cry smx..it use 2 be everyday ..hen every week now its lk 1ce a month or so..