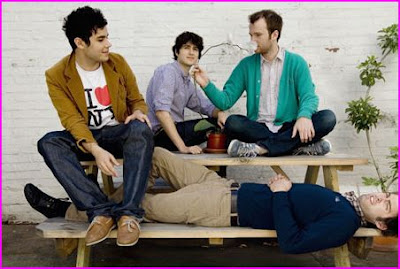 Their self-titled debut album was released on January 29, 2008 on XL Recordings to, so far, critical success and the single A-Punk garnering heavy airplay on Alternative radio stations throughout the US. They are quickly garnering comparisons to Paul Simon’s Graceland for the Afro-pop style, as well as to The Kinks and NYC’s The Walkmen. The album itself is also drawing comparisons to The Strokes’ 2001 debut, Is This It, which also broke through at the time for its pop simplicity and ingenuity.

Vampire Weekend received much buzz from local blogs throughout 2007 during their rise to a record deal. Rolling Stone placed Cape Cod Kwassa Kwassa at number 57 for the top 100 songs of 2007. They also garnered much local buzz in the summer of 2007 with their song Oxford Comma, which gripes about prep grammar, Lil’ Jon, and coal drama. They are currently on their first major tour, covering North America and ending off at Coachella 2008 in Indio, California.

Guys, I 1st heard of this band on Lupe Fiasco b sure 2 check out Ottoman as well..They r really good live. Cape Cod is such a fun sng performed outdoors with the drums echoing in the atmosphere:) & its sooo fun 2 sing cape cod with abunch of pep especially that part "Lk U know I dO - OO-OOwww.."super fun & festive.I luv that..lol..So if u have a chance 2 go 2 their outdoor concert I recommend doing do;)If just 4 Cape Cod:)do that:)

The song in the field is GREAT!!!

Next concert is in Helsinki nothing in US...stinkypoo!