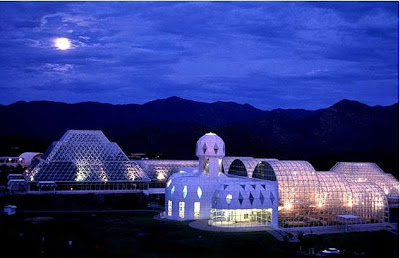 Serendipity...
Biosphere 2 has had a troubled life, and the latest chapter in the saga—announced in June—involves reincarnation as a luxury development.

The plot begins in the late 1980s, when the original owner, Texas oilman Ed Bass, spent $150 million to create a model of the first biosphere (Earth) near Tucson, Arizona. When it was completed, the facility became a controversial and broad experiment in hermetically sealed, self-sustained living with the aim of revealing how humans might fare on space colonies. Eight human “biospherians” lived inside the structure for two years, from 1991 to 1993. After most crops failed, the team lived on emergency rations from outside the bubble until a depleting oxygen supply brought the experiment to a halt. “Basically, we suffocated, starved, and went mad,” said biospherian Jane Poynter in 2003.


Guys, In reguards 2 the text those r not my beliefs I'm focussing on Biosphere 2:)
Posted by theceelist at 8:30 AM

I hope that isn't the promo materials for the luxury resort... but then again women pay big bucks to go to Canyon Ranch and other places to slim down... sounds like they could at Biosphere easily...

I think smx ideas r driven by pure ego. I mean Im not an intellectual elite at all I could hv tld them the outcome my self.

Its pretty on the outside but pointless wht a waste..that $ could hv gone 2 sm schools in the ghetto or smthing.

EGO project... better to have funded some schools...

yeah taht totally restarted I hope I never ever b that arrogant EVER..lol..lk smthing in the back of the minds should hv thought tis is really restarted strange cult pep..lol such a waist!

I would hv been lk & y the F r we doin this again can sm1 please remind me??LOL