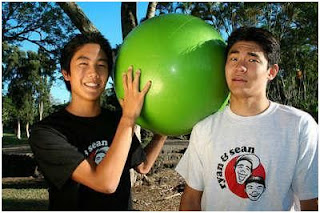 FROM THE big island to the big screen, Ryan Higa and Sean Fujiyoshi like to do things on a grand scale.The Hilo, Hawaii, teens come from paradise far removed from the mainland but reach an audience of millions through their YouTube videos. Their clips, which range from iPod spoofs to a "How To" series on becoming a ninja or gangster, have garnered the duo a substantial following — theirs is the second-most subscribed channel of all time on YouTube with more than 1.3 million followers.


"I never thought any of this would ever happen," Fujiyoshi says. "It's just a whole different experience. We started out as normal people just like them (the fans), and it's different and weird but cool at the same time."

Posted by theceelist at 8:00 PM

hey kitty this 1 is hilarious 2..http://www.youtube.com/watch?v=oRJvbEej_Is&feature=channel_page

I'm going watch all these tonight... it will be my "television"!!!

I know I do that 2 I dnt really watch TV but my lap top is sorrta my tv..Im going 2 post sm more stuff I watch in a bit:)