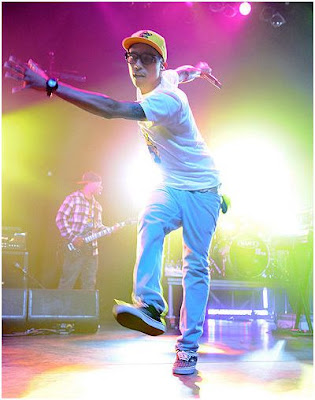 Pharrell Williams (born April 5, 1973), commonly known as Pharrell, is an American record producer and recording artist. Along with Chad Hugo, they make the record production duo The Neptunes, where they produce pop, hip hop and R&B music. He is also the lead singer and drummer of rock band N.E.R.D, which he formed with Hugo and childhood friend Shay Haley. He released his debut single "Frontin'" in 2003 and followed up with his debut album In My Mind in 2006.

As part of The Neptunes, Williams has produced numerous hit singles for various music artists. The Neptunes have earned three Grammy Awards amongst ten nominations. He is also the co-founder of the clothing brands Billionaire Boys Club and Ice Cream Clothing.

2 me he mixes a lil old with new hippy disco & urban & he does a great job ..pretty cool :) His BBC slogan is hilarious "Wealth Is In The Heart & Mind Not In The Pockets!"..LOL..I have a BBC Shirt I caught at a concert it's cool I'm going 2 wear tomorrow...LOL:)

Posted by theceelist at 9:05 AM

I wore my shirt I was looking doper than a mother.f'r..loooool:)