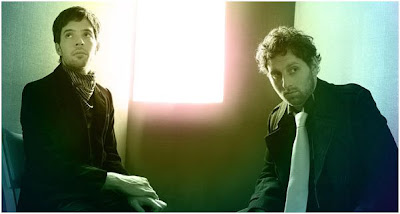 Originally a duo of Jeremy Greenspan and Johnny Dark, Junior Boys created a sound that would reconcile their influences. Years of collaboration followed and a demo was produced, but after many rejections and near-misses, they were resigned to being bedroom beat constructors. Soon after, Johnny Dark left the band to pursue other interests. Eventually KIN Records heard their demo at the end of 2002 and commissioned more work from remaining member Greenspan. Hooking up with his engineer, Matt Didemus, he began again, writing more material and pulling an album together.

I know their music is relaxing..u know I tried 2 get an interview from these guys they didnt email me bk lk wtf...LOOOOL I'll try again 4 u...LOL:)

An interview would be amazing...

Their artwork I luv.

Y thanks lol:)
Interview.. I try I think alot of the x pep think u may twist their words ..my idea is/was 2 get a few then build upon..thats where trust is gained it may b a trust thing or sm x ego I dnt know

art work is retro retro is cool 3 yrs ago i went crazy 2 the point i had enough I mean my whole apt retro then 1 day I had my bro come over 2 chng every thing 2 plain white walls & throw all the retro stuff out I was just annoyed .. so i took it out on the retro...lol lll wake up smx & b lk Im soo fin annoyed 2day im going 2 reconstruct 2day..lol.