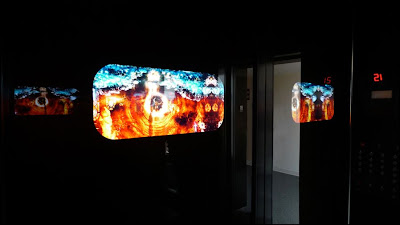 Marco Brambilla (born 1964, Milan, Italy) is an Italian-born Canadian artist and filmmaker who works in the United States. Educated at Ryerson University, Toronto, Canada, where he studied film, he first worked in commercials and feature films, directing the successful 1993 science fiction film Demolition Man. In 1998 he shifted focus to video and photography projects, and has since exhibited works in private and public collections, including at the Guggenheim Museum in New York,[2] "Cyclorama" at the San Francisco Museum of Modern Art,[3] and "HalfLife" at the New Museum of Contemporary Art,[4] His commissions include "Superstar" for the "59th Minute" series in Times Square in 1999,[5] and "Arcadia" for "Massless Medium: Explorations in Sensory Immersion" at Brooklyn Bridge Anchorage in 2001,[6] both for New York public arts organization Creative Time. His installation, "Cathedral" was showcased during the Toronto International Film Festival 2008 and his latest work "Civilization" will be a permanent installation at the Standard Hotel in New York when it opens in 2009. Transit, a collection of photographs Brambilla took in and around national and international airports, was published by Booth-Clibborn Edit.


Civilization depicts a journey from hell to heaven interpreted through the modern language of film using computer-enhanced found footage. This epic video mural contains over 300 individual channels of looped video blended into a multi-layered seamless tableau of interconnecting images that illustrates a contemporary, satirical take on the concepts of Heaven and Hell. winki

Interesting!
Posted by theceelist at 11:30 PM

Briliance... Marco has brilliance and I feel so inspired...

Thank you so much for the coolest coolest stuff!

I know the elevator is so cool 2 ride. This guy must hv been excited 2 hv his work there. Be sure 2 read his interview:)