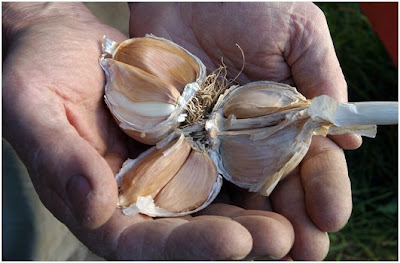 GarlicGarlic has long been touted as a health booster, but it’s never been clear why the herb might be good for you. Now new research is beginning to unlock the secrets of the odoriferous bulb.

In a study published today in the Proceedings of the National Academy of Sciences, researchers show that eating garlic appears to boost our natural supply of hydrogen sulfide. Hydrogen sulfide is actually poisonous at high concentrations — it’s the same noxious byproduct of oil refining that smells like rotten eggs. But the body makes its own supply of the stuff, which acts as an antioxidant and transmits cellular signals that relax blood vessels and increase blood flow.

The power to boost hydrogen sulfide production may help explain why a garlic-rich diet appears to protect against various cancers, including breast, prostate and colon cancer, say the study authors. Higher hydrogen sulfide might also protect the heart, according to other experts. Although garlic has not consistently been shown to lower cholesterol levels, researchers at Albert Einstein College of Medicine earlier this year found that injecting hydrogensulfide into mice almost completely prevented the damage to heart muscle caused by a heart attack.

“People have known garlic was important and has health benefits for centuries,” said Dr. David W. Kraus, associate professor of environmental science and biology at the University of Alabama. “Even the Greeks would feed garlic to their athletes before they competed in the Olympic games.”