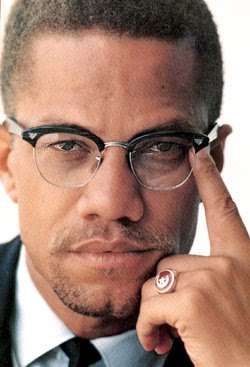 Malcolm Little; May 19, 1925 – February 21, 1965, also known as El-Hajj Malik El-Shabazz,[1] was an African American Muslim minister, public speaker, and human rights activist. To his admirers, he was a courageous advocate for the rights of African Americans, a man who indicted white America in the harshest terms for its crimes against black Americans.[2] His detractors accused him of preaching racism and violence.[3][4][5] He has been described as one of the greatest and most influential African Americans in history.[6][7][8]

Malcolm X was born in Omaha, Nebraska. By the time he was 13, his father had died and his mother had been committed to a mental hospital. After living in a series of foster homes, Malcolm X became involved in the criminal underworld in Boston and New York. In 1945, Malcolm X was sentenced to eight to ten years in prison.

After leaving the Nation of Islam, Malcolm X became a Sunni Muslim and made a pilgrimage to Mecca. He traveled extensively throughout Africa and the Middle East. He founded Muslim Mosque, Inc., a religious organization, and the secular, black nationalist Organization of Afro-American Unity. Less than a year after he left the Nation of Islam, Malcolm X was assassinated while giving a speech in New York.

Posted by theceelist at 7:31 AM

It seems like Malcolm learned the biggest lessons at the very end of his life...

Listening to leaders like Nasser, Ben Bella, and Nkrumah awakened me to the dangers of racism. I realized racism isn't just a black and white problem. It's brought bloodbaths to about every nation on earth at one time or another.
Brother, remember the time that white college girl came into the restaurant—the one who wanted to help the [Black] Muslims and the whites get together—and I told her there wasn't a ghost of a chance and she went away crying? Well, I've lived to regret that incident. In many parts of the African continent I saw white students helping black people. Something like this kills a lot of argument. I did many things as a [Black] Muslim that I'm sorry for now. I was a zombie then—like all [Black] Muslims—I was hypnotized, pointed in a certain direction and told to march. Well, I guess a man's entitled to make a fool of himself if he's ready to pay the cost. It cost me 12 years.
That was a bad scene, brother. The sickness and madness of those days—I'm glad to be free of them.[193]