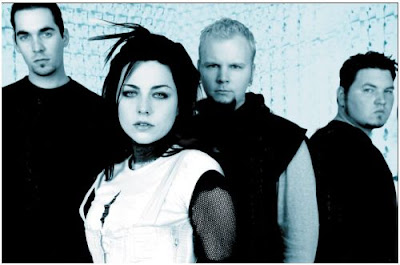 Amy Lynn Hartzler (née Lee; born December 13, 1981), best known as Amy Lee, is an American singer-songwriter and classically-trained pianist. She is co-founder and lead vocalist of the alternative metal band Evanescence. Her influences range from classical musicians such as Mozart to modern artists like Björk, Tori Amos, Danny Elfman,[1] and Plumb.

They went through several names, including Childish Intentions and Stricken, before deciding on the name Evanescence (meaning the act of vanishing, synonymous to disappearance).

After releasing a few EPs, their first major album Fallen has been certified 6x Platinum , spent 43 weeks in the Billboard Top 10 and has sold over 14 million copies worldwide.

On October 22, 2003, Moody left the band abruptly in the middle of a European tour. The reasons for his departure were reportedly "creative differences."

Evanescence is set to release their second album, titled The Open Door, which will feature 13 tracks.

winki
Posted by theceelist at 7:28 AM