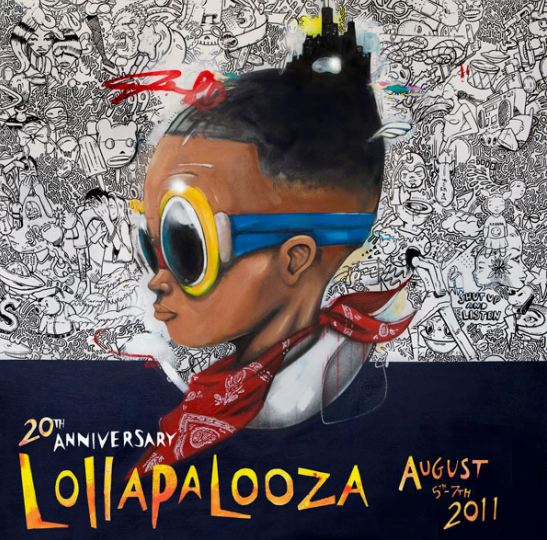 Super Fly!
local artist Hebru Brantley, who was commissioned by Perry Farrell and Lollapalooza to create the official artwork for Lollapalooza 2011, which also happens to be the twenty year anniversary. Hebru’s design is featured on tickets as well as limited edition posters (signed by Hebru and Perry) which are now
If you cant make this event, Lollapalooza 2011 can also viewed  live on the Lollapalooza's Youtube Channel. My mom told me this yesterday. So I told her, "it sounds like you know more about it than I do." Then I asked her, " are you sure you're not going mom?!..Then we both had a great LOL." She's the funniest, coolest sweetest mom in the whole world!!:)
View the complete Line-Up...
Lollapalooza 2011
Posted by theceelist at 8:33 AM

Dud u see Coldplay 'yellow' so touching & so so sooooo beautiful.. I luuuuuv that sng my gosh the most perfect love sng.. It mks me cry till this day:) loling

Im gonna add it now!:)
u may hv seen it but hey i use to luuuuv Chris Martin ..when he dances his silly jig..loling i luv that & his cracky voice 2..lol

Hez funny & cool he looks so young in the yellow vid:)