THE HUNGER GAMES by Suzanne Collins 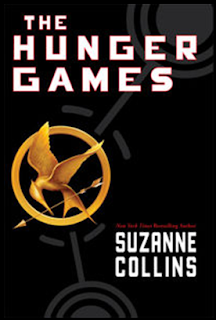 The Hunger Games is set in an unspecified future time when things have gone pretty spectacularly badly for humanity. The world, or the bit of it we can see, is dominated by a ruling caste who live in luxury in a city called the Capitol. The rest of us live like peasants in 12 districts that are strictly cordoned off from the Capitol and one another. Life in the districts sucks: it's mostly hard labor--mining coal and farming and working in factories--in dismal conditions.
To make things even dismaler, once a year each district is required to give up two of its children, chosen by lottery, and enter them in the Hunger Games. The kids are dropped into an enormous arena strewn with traps and hazards, with a heap of weapons and supplies in the middle. The last child alive wins a lifetime of luxury and celebrity. The action is filmed and broadcast to the entire world.
1st chapter: community
Time
Posted by theceelist at 2:30 PM

That is sooooo BLEAK.

I thought we were takeinf a trip on the wild side 4 a change wild side usually results into tears 1way or a nuther.. Ha ha lol