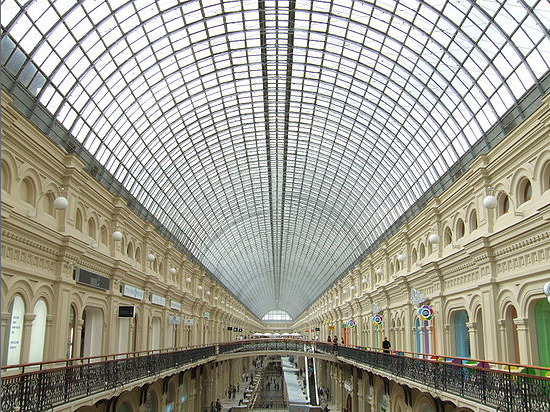 GUM Department Store is located on the Red Square's east side. The building was designed by Alexander Pomerantsev and was built between the years 1889 - 1893 in the then contemporary Russian style.
The building consists of three separate elongated halls. The roof is built of glass and when the sun shines through the formation of an especially beautiful glow inside the building. Originally included department store over a thousand shops selling everything from furs to the candles.
For some years, when Stalin ruled the country, building premises used for office, but today is the department store shops mainly of Western luxury brands as Benetton, Estee Lauder and Christian Dior, along with many cafes and restaurants.
Posted by theceelist at 12:41 PM

Did u c the pretty flowers that I put on good little pussy????

They would luv that bui;lding sunshine.

It is I luv the window roof! I'd luv to stroll through it and go to a cafe or restaurant!

At first I didn't think it was even real.

what else i there 2 say besides welcolm bk:)

LUV LUV those orshards a bunch bunch my fav:)