“With a little more work, we were able to get my trainer Vivi over from Switzerland for early mornings at a private gym in Fitzrovia, and some calls to friends at the Foreign Office helped us track down an Arabic teacher who could do private classes straight after the gym”) 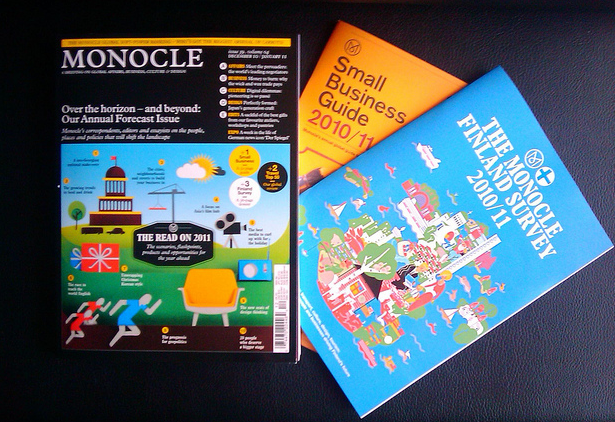 MONOCLE - issue 39
Tyler Brûlé ushered in a design revolution with Wallpaper magazine. His new global media strategy is equally rarefied, and only occasionally ridiculous. Listen to him for a while, and the world seems positively aglow with possibility.
Tyler Brûlé—editor, tastemaker, mini media mogul—is sitting in the bar at the Crosby Street Hotel drinking from a pretty bottle of bubbly water. There is nothing in his appearance or his demeanor, both of which call to mind an exceptionally relaxed Clark Kent, to suggest that he is merely between long-haul flights to places like Rio and Seoul. Everything about him communicates health and ease, with himself and with his surroundings. He can, after all, claim a certain amount of credit for the environment he finds himself in. Brûlé is the man who created Wallpaper magazine, back in 1996, and with it a generation of urban designophiles in clever glasses who know their Jean Nouvel from their Andrée Putman and who like their hotels exactly like this one. The manager waves across the room: Is there any better endorsement than Tyler Brûlé?

In the morning Brûlé (as in crème) will be off again—he’ll check in someplace else similarly well-lit—but for the moment, he is focused as can be on the topic at hand: old media. He loves it. Can’t get enough. “I don’t want to sound like a Luddite about it,” he says, “but …” But Brûlé sort of is. Not a Luddite, exactly, but a hard-core devotee of old-fashioned media: of magazines that are printed on paper, of news programs that dedicate hours to single topics, and of well-modulated, unhysterical coverage of things other than, as he puts it, missing white women. As the media conglomerates of the world attempt to figure out their plans for the future, Brûlé is hatching a tiny and very specific media empire from a lovely part of Central London called Marylebone.


At its core is Monocle, a ten-times-a-year journal published in the U.K.—but with “bureaux” in Tokyo, Hong Kong, Zurich, and New York—that covers everything from development in Maputo to a spectacular little shoe shop off some Strasse in Baden-Baden. Launched in 2007 and bearing the tagline “A briefing on global affairs, business, culture & design,” it wouldn’t at first glance appear to be the kind of publication destined to survive a Great Recession.


For one thing, Monocle is, defiantly, a print publication: Its editors are totally obsessed with paper. When the new issues arrive at the London HQ, they all stand around plunging their noses deep into the binding for a whiff. Some issues have eight or nine different paper stocks, each with its own distinctive smell, and so they sometimes smell each section on its own. “The whole print-media thing is sort of self-fulfilling,” he says. “It’s part of our mantra: If you put a magazine on shitty paper with shitty repro and bad journalism, why should people want to buy it? If you deliver something that has an improved quality of paper and is collectible, it shouldn’t come as a surprise that people want to pick it up, hold on to it, pay a premium on it.”


But Monocle is not only the magazine. There’s Monocle radio, which offers up interviews with the Estonian prime minister live from Tallinn, and with the best Lebanese fashion designer working in Paris these days. There’s Monocle retail; there are now several Monocle stores around the world, including one that just popped up on Hudson Street. And starting December 18, there will be Monocle TV on the Bloomberg network. It’s a weekly hour of what Brûlé describes as “gentle, good, informative viewing” not unlike old episodes of 60 Minutes or even CBS’s retro Sunday Morning. The show will feature magazine-style reports from Monocle’s correspondents that are unhurried in tone. About it he says this: “I hope it will be a return to more elegant television.”

The key to comprehending the Brûlé philosophy is to understand it is developed chiefly via great enthusiasms. Monocle is not naïve about the world (though reading it, you could be excused for thinking the Japanese are incapable of bad design or deflation), nor is it cynical. “Through the darkest hours of a sagging economy, there’s always an optimistic tone,” says Brûlé. “There’s lots of hectoring voices out there, a lot of anger about things, but that’s not why people come to our brand.”


The magazine is, in many ways, in distinct opposition to the prevailing winds of culture: It cares next to nothing for celebrities. It’s earnest rather than ironic. And perhaps most touchingly, it keeps wanting to unearth success stories—or to proffer advice for companies and countries that could use a bit of a rethink. As high-flying as its tastes can seem (“It’s official: The Koreans do the best hotel gyms”), Monocle also exhibits a deep curiosity about the state of infrastructure in big cities and small towns. About public housing. About measures to improve traffic safety in La Paz (hiring youths in zebra costumes had a strangely beneficial effect). About the efforts of Tbilisi to transform its skyline. It assumes its readers are every bit as interested in the goings-on at city hall in Belo Horizonte, Brazil, as they are in understanding how Afghan drug lords have destroyed the temples of a desperately remote town. It also assumes they’re eager to know where to get excellent toiletries in Zurich and delicious margaritas in Beirut.


continue...
nymag
&
monocle
Posted by theceelist at 9:06 AM

The magazine is, in many ways, in distinct opposition to the prevailing winds of culture: It cares next to nothing for celebrities. It’s earnest rather than ironic. And perhaps most touchingly, it keeps wanting to unearth success stories—or to proffer advice for companies and countries that could use a bit of a rethink. As high-flying as its tastes can seem (“It’s official: The Koreans do the best hotel gyms”), Monocle also exhibits a deep curiosity about the state of infrastructure in big cities and small towns.

Tyler is very inspiring guy...I thought that part about him getting a private jet was funny..he knows the finest of the finest..the water is hilarious...

he seems 2 b a great conversationalist!