Classified for 30 years as World Heritage of Humanity, the Palace of Versailles is one of the finest achievements of French art in the seventeenth century. The former hunting lodge of Louis XIII was converted and enlarged by his son Louis XIV, who installed the court and government of France in 1682. Until the French Revolution, the Kings have followed one another, take turns embellishing the castle.


Hall of Mirrors State Apartments of the King, Museum of the History of France, over the centuries, the castle of Versailles, the seat of power until 1789, has continued to unfold.


It is initially a modest chateau built by Louis XIII to hunt. It is this location to be chosen, however, by Louis XIV to build the palace we know today, a symbol of royal absolutism and the embodiment of French classical art.


In the 1670s, including Louis XIV arrange the Apartments of the King and Queen. Instead of parade and reception par excellence, achieving the most emblematic of this area is the Hall of Mirrors designed by Mansart. In the following century, the Chapel and the Opera (in Louis XV) are emerging.


If the castle lost its role as the official seat of power in 1789, he knows the nineteenth century a new destiny: to become the Museum of the History of France, commissioned by Louis-Philippe ascended the throne in 1830. Many rooms in the castle, so welcome the new collections tracing the major events in the history of France, enriched through the early twentieth century. 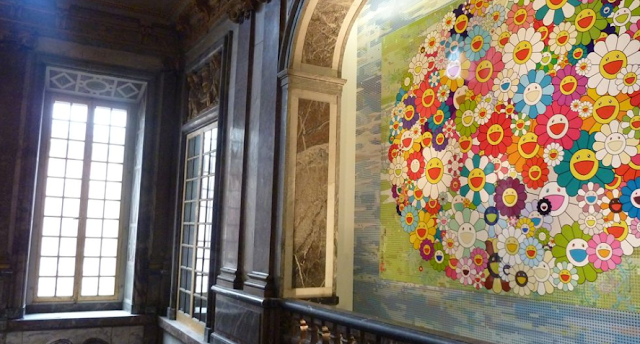 Takashi Murakami exhibition at Versailles
September 14 to December 12, 2010, Great Hall of Mirrors and apartments included in the guided tour. Water parterre: free
(except during Great Waters. closed on Mondays).
sorry 4 such late notice. Ive been meaning 2 post this 2 months ago but it slipped my mind:(
:)..LOL
I THINK the exhibit is going to Doha..so perhaps catch it there if u can:)
Posted by theceelist at 4:45 PM

Yeah there is a such thing of a city being too modern...the Islamic art museum looks cool .Qatar looks sortta boring though ... It's soooo cold outside and it is warm there lol :)