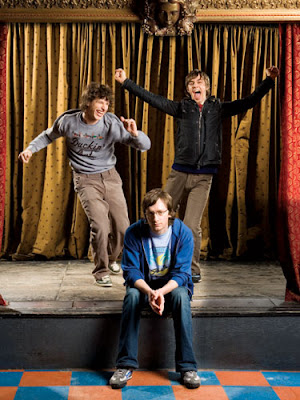 The Lonely Island (TLI) is a comedy group composed of Akiva Schaffer, Jorma Taccone, and Andy Samberg (aka the Dudes). The group is from Berkeley, California, and currently works out of New York City. The group began creating live comedy skits in junior high and continued to do so, expanding its repertoire to comedic shorts, music parody (both songs and videos), and one full-length television pilot, before coming to the attention of Lorne Michaels of Saturday Night Live (SNL). Once on the show, they wrote "Lazy Sunday" a better-produced music parody video much like the group's previous work.[1] It became an instant Internet success, and led to the digital shorts the group produces, writes and stars in for Saturday Night Live. "Jizz in My Pants" and "I'm on a Boat" have subsequently had huge success both on the show and on the Internet.

In August 2007, the group premiered its first feature film, Hot Rod.[2] Success with the digital shorts led to the release of its debut album, Incredibad, on February 10, 2009, on Universal Republic Records

Guys, "The Lonely Island" cd is pretty funny. Some of the songs aren't 4 kids:) I like the beat 2 "Boombox."

Posted by theceelist at 8:54 AM