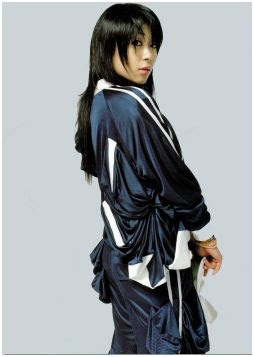 Hikaru Utada (宇多田 ヒカル, Utada Hikaru, born January 19, 1983), also known by her fans as Hikki (ヒッキー, Hikkī), is a singer-songwriter, arranger and record producer in Japan. Utada's debut album First Love became Japan's biggest selling album of all time with over 7.65 million copies sold in Japan alone to date. The release of her later works helped her remain one of Japan's top artist, with 3 of her Japanese studio albums being ranked in Top 10 best-selling albums ever in Japan (#1, #4, #8).

She has had 12 #1 hits to date on the Oricon Singles chart, with two notable record achievements for a female solo or group artist: 5 of them being million-sellers and 4 placing in the Top 100 All-Time Best-selling Singles. In addition, Utada has won the Nihon Golden Disk "Song of the Year" award for 14 of her singles since 2000 and has won the Golden Disc "Pop/Rock Album of the Year" award for all her 4 Japanese studio albums. In 2003, Utada was ranked the #24 Japanese pop artist in its survey of "Top 100 Japanese Pop Artists of All Time" by HMV,and #10 in HMV's "Top 30 Best Japanese Singers of All Time" in 2006. She is also known for her two theme song contributions to Square Enix's Kingdom Hearts video game series: "Simple and Clean" and "Sanctuary". In 2007, her single "Flavor of Life" reached #2 in worldwide digital download yearly single chart with over 7.2 million downloads, and contributes to 12 million digital sales for her over the same year.

Posted by theceelist at 7:01 AM

Thanks for showing her...